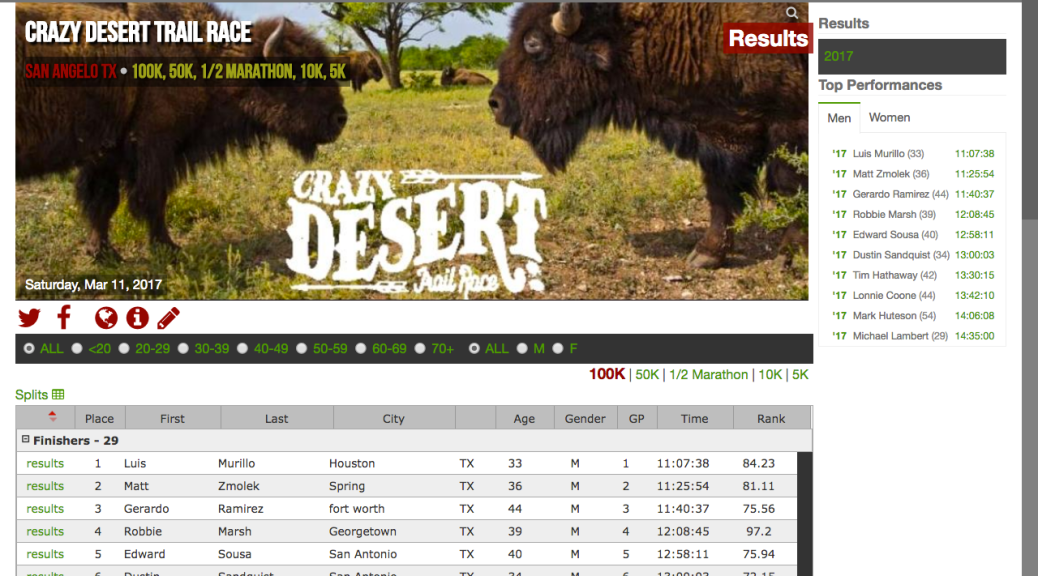 I regret going into the race with that sort of attitude. I didn’t prepare as well and my performance suffered as a result. I didn’t have a terrible race, but I know it could have been better. Many small things added up to a frustrating race.

One of the bigger culprits was not getting enough sleep. The day before the race, I got up before 6 to go hiking with a coworker, went to work, and then drove 3 hours to San Angelo, finally getting to bed around 11. That is far from ideal. Sufficient sleep is vital for good performance mentally and physically. When I started the race, my legs felt heavy.

I wore my newish Ultimate Direction hydration pack. I’ve worn it a few times, but never raced in it. I think it still needs to be broken in. Maybe 10 miles in, I noticed my bottle was jamming my rib cage, making a very tender spot. After I finished the first loop, I put on my old Salomon pack and it just felt great. I also love the huge back pocket that I can reach into without having to unzip or zip. Basically, these little gear niggles should be worked out prior to a race, not during.

Coming into the second to last aid station, I found out that the course mileage was off by 5 miles. I was heading into the last aid station when I should have been finishing the loop. This threw me off mentally. What would happen now? Would we have to run a 75miler? I imagined several possible scenarios that could play out, finally resolving not to sweat it, Rob would figure something out. No way would he make us run an extra 13 miles. Like I tell myself all the time, just focus on the mile in front of you.

The sky had been overcast for the entire first loop. It seemed like it was going to be a perfect day for running. Thinking it would stay that way was wishful thinking. Wishful thinking that got me mildly sunburned and drained quite a bit of energy from me.

My old man hat and ice bandana have saved me on numerous sunny occasions. I had them in my bag at the start/ finish, but chose not to bring them with me as I foolishly thought it would be overcast all day. Katie offered sunscreen, which I declined. 2 huge mistakes, likely due to lack of sleep and fretting about the course mileage issue.

The clouds burned off and the sun was in full effect. There was very little shade on the course, it was extremely exposed. Every I looked, there was cactus, as if to remind me that I was in the desert. I used my buff as an ice bandana, and that worked okay. Proper ice bandana is way faster to fill and wear. There wasn’t much I could do about the sun. Whenever I saw shade, I stopped and took a short break.

Hydration and nutrition were okay. Shat once before the race, but still had enough for three more times during the first loop. Wore Calderas first loop, but switched into Lone Peaks for the last two loops. Forgot iPod on second loop, only had music for last loop.

I have never looked at my watch so many times during a race. It became incredibly frustrating near the end trying to figure out how much longer I would be running. I wanted to do 12 hours, and kept trying to calculate in my head if I could. Each time I did the calculations, my results changed. That was pretty demoralizing. And add to that the fact that we had to run a few extra miles because of the marking error, so I wasn’t entirely sure how close I was to the finish.

Leapfrogged with several runners, including Julie of course. Finally caught up to Dustin in the very last mile. He had been puking but was moving. I didn’t stop to talk or run wit him, I just ran past him. Finished in 12:58 for 5th. Dustin showed up two minutes later to finish in 13 hours on the nose for 6th and Julie came in at 13:01 for 7th. She won 100k last week and again this week. Amazing.

So while not a terrible race, it was a far cry from the planning and execution of the last race. What’s worse is that now I am behind in points (but I think just barely) for the Desert trail race series. The winner of the three race series gets $500. I’ve never won any money from running, and it would be awesome if I did. The last race is the Franklin Mountain 50K in November. It looks like if I want to win that money, I am going to have to train, plan, and race my ass off. So maybe being behind is a good thing, providing me the motivation to focus on the task ahead. 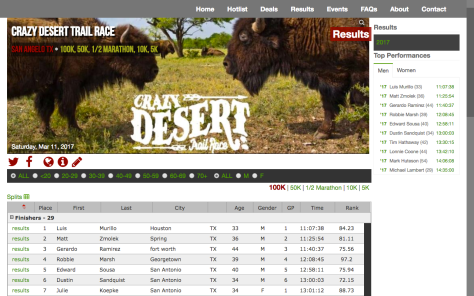