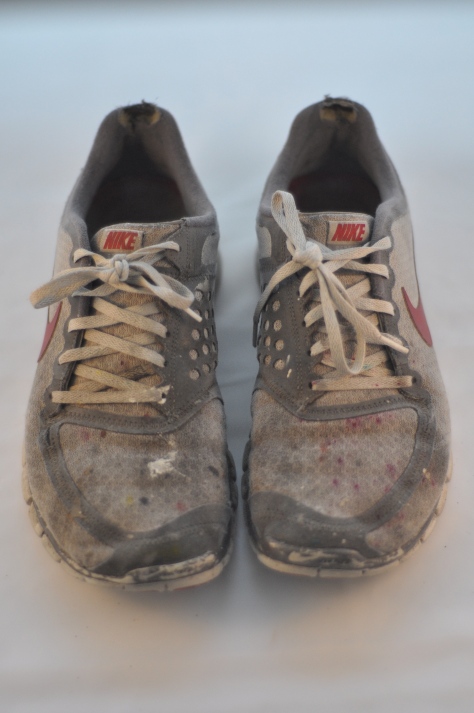 These are my very first pair, about 4 or 5 years ago when I was living in Portland. The first time I wore them was on a run home from work. It was one of the most magical runs I’ve ever had. I felt really… free. (Sorry) I’ve since become accustomed to the sensation of minimalist shoes, but that first run, wow! I wore them at work in the paint department, which is why they are covered in specks of magenta. The laces don’t stay tied worth a damn, even with double knotting, they smell funky, which is weird because my feet don’t usually stink, and they probably have at least a million miles on them, but I can’t bring myself to throw them out. I even did a painting of them. I’ve since bought 3 other pairs, though one pair got thrown out of a train window in Viet Nam because I’d gone swimming in them and they never got to dry out because I wrapped them up in a plastic bag along with my running shorts, and they began to smell unbearable….

But these ones, they’re still here with me. In fact, I’m wearing them right now.
Yeah, I think I’ll keep ’em.