Had to change starting point because I realized with no water on the route. Started near the middle of the route. Kind of an error in planning that I didn’t return to the car at the halfway point. I was near the car at one point, but it didn’t even dawn on me to go and get my other bladder of water. There’s a lesson for route planning on longer runs: either know where there’s water on the route or plan to circle back to the car.

If it’s cold out, park your car in the sun.

You don’t need a cooler for drinks! Figured that one out on the 24 hour run.

If swapping bladders, figure out how to prevent the water from getting cold. No fun putting a chilled bladder on your back.

Bacon should not be cooked crispy because it crumbles into bacon bits.

Totino’s pizza rolls were pretty good. I was concerned about the acidity causing indigestion, but I ate only two at a time and I had no issues.

The Cuban sandwich was good, but not nearly as good as it is when it’s hot.

Those hand warmer dealies work pretty well. I wondered why the warmer placement on gloves is on the back of the hand. My theory is that once the blood is warmed there, warm blood goes into your fingers, making your fingers warm. They lasted quiet awhile and are certainly worth having.

Need to wrap the middle section of poles with some insulation. Those things get cold.

Need gloves that I don’t have to take off to use my phone. I must have removed my glove and then put it back on at least 50 times today.

Got to use my Microspikes!!  I was debating whether I should put them on. Why else did I carry them? Duh. There was a bit of snow at the start of the run. I didn’t think it was really worth putting the Spikes on, but it helped out a lot. They felt very secure, and gave excellent traction. I ran in them up Red Butte and then Mount Wire, down and back up Mount Wire. The second time down, I took them off. I wondered why they needed a bag to carry them. It’s because they get all muddy and dirty.

Lone Peaks were again great, although my toes grabbed some rocks a few times.

Tights were good for the most part, although they often felt like they were being pulled down. The drawstring is too thin. Needs something more belt like.

Tons of mountain bikers. Several times I didn’t hear them approaching, startled me.

Saw so many dogs!! Thought next time to take a photo of every dog, Dogs of Strava.

So many trails, many of which don’t show up on the Gaia app. Very tedious stopping every so often to double check which trail to get on. Late in the run, I said the heck with it. Just run. Get somewhere and then figure out where to go next. That was freeing. Took some crazy steep slippery downhills that way. But also ran this awesome rocky ridge that went on quite a ways. That may have been the highlight section of the day.

Some GoPro footage might be neat. Or doing a video call home while on a peak. 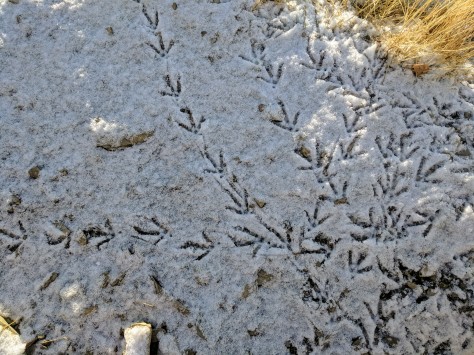