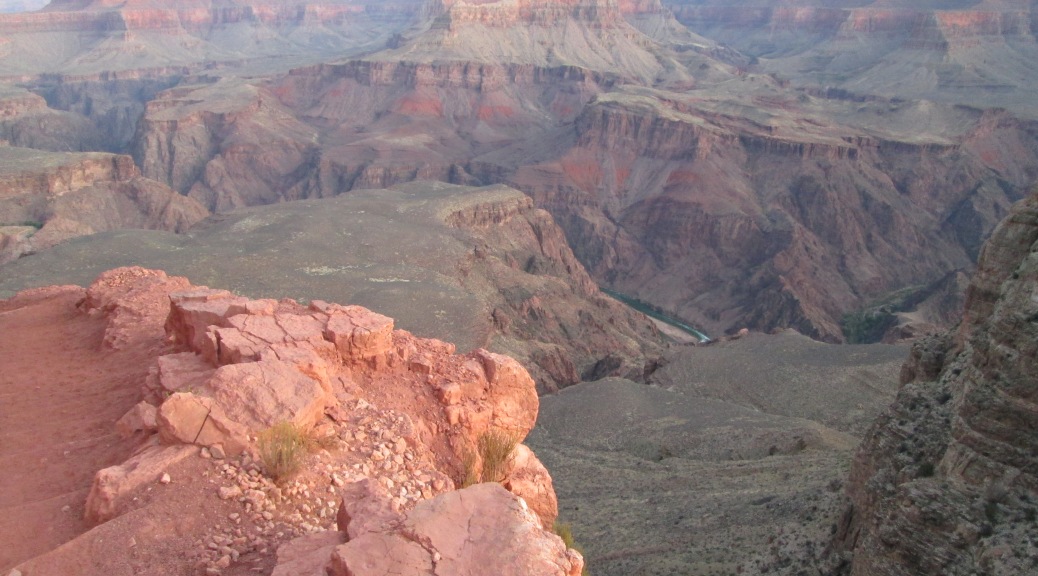 There’s no way to capture the scale of the Grand Canyon in a photo, so I was looking forward to seeing it with my own eyes and as I  ran through it. The canyon lived up to the hype. It was impressive and a little ginormous. The run, however, wasn’t as hard as I expected it to be. I expected to be on Death’s door, shriveled up and/or burned to a crisp after finishing.

But it wasn’t that bad, which was oddly disappointing.

Don’t get me wrong, it was tough. Especially the last four hours hiking up Bright Angel Trail. But overall, it felt like another 50 mile race, just with more vertical. I feel like I trained pretty well for the run, but what really made it “easier” was the weather.

Perhaps the trail gods pitied us, as there was cloud cover for a good portion of the day. This made a huge difference: It spared us the heat of the inner canyon, which is supposed to be tortuous. It allowed us to run for longer periods without overheating. And it kept us from running out of water. (Sort of.)

Ultimately, I’m thankful we didn’t have to endure the heat.

I ran with four other people from our group of 20. We started about 4:45 am. Once it got light, the first few miles were spent oohing and ahhing and taking pictures. It was awhile before we really got going. We took our time and drank in the Canyon. We made several stops along the way, but the majority of the first 15-20 miles was uneventful and went by relatively quick. 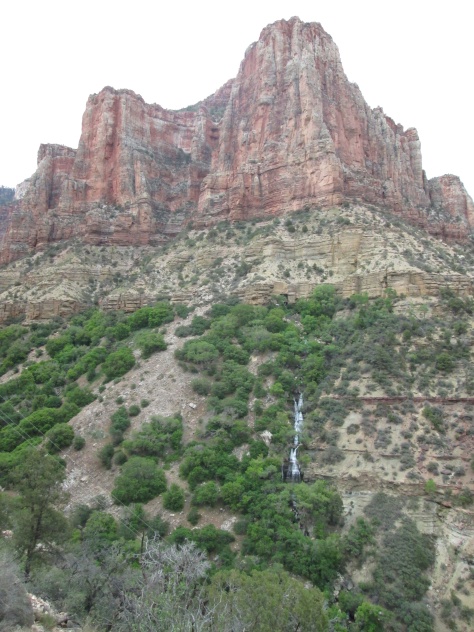 Lower mid right, that white streak is a baby waterfall.

As the day went on, it warmed up. Going up North Kaibab was probably the worst of the heat. It was hot, but not unbearably so. We stopped in an awesome shady spot and lounged for a bit. The rock was cool and felt great on our tired legs. Once we started back up, we were greeted with a never-ending series of switchbacks to the top.

We eventually made it to the top of North Kaibab and had lunch. One of the other sub groups was already there, so we got to to eat and chat with them. But the best treat? The water. Oh-my-goodness!! So cold and refreshing. (I felt guilty about dumping out  my bladder just so I could refill it with cold water.) Oh, and mental note for next time: Extended breaks make it extremely hard to get moving again.

After the agonizing uphill, running –actual running– the downhill was really fun. I felt we had been trudging along all day (which was probably actually a good thing), but now was a chance to to open it up. I love the feeling of bounding through rocky trails as fast as I can. So I started running up ahead at my own pace and then stopping and waiting for the others. They were never that far behind, so that worked out great. But I had to remind myself to keep it in check because there’d be hill to pay later.

At Cottonwood, we stopped and soaked our feet and legs. The ice cold water felt great, though I could handle it for only like 10 seconds at a time. The others had no problems sitting in the water up to their waist, so eventually I had to do the same. It felt great for like a second. It’s crazy how fast the water evaporates though.

We took a detour to check out Ribbon Falls.  It was a great little water fall. You can climb up to the top and stick your head under the water. As you might imagine, it felt great.

And then came the slog. Running back through the inner canyon was the running version of Groundhog Day. It was the L-o-n-g-e-s-t S-e-v-e-n  M-i-l-e-s  E-v-e-r. We would have really suffered here if it weren’t for the cloud cover because the rock absorbs the sun’s heat all day and then radiates it right back out into your face.

By this time, the moon was nowhere to be seen and it was pitch black. Michele had a problem with her headlamp/batteries, so I let her use my headlamp. I ran between her and Tanya and was able to see well enough. The trekking poles were a lifesaver here. They allowed me to cross over the logs more easily, helped provide depth perception, and overall stability.

This was by far the toughest section to get through. It was certainly  challenging physically, but even more so mentally. We could hike only so fast. Partly because we were tired and partly because of the fear of walking off the cliff. Chris had said if we could do a 30 minute mile, we were doing well. That sounded ridiculous, but I think it was true.

There were some lights at the top of the canyon that we seemed to be moving toward but not getting any closer. We seemed to be hiking forever but not making any progress. All we could see was five feet in front of us. And those damn lights up top. I started thinking about food. I would have killed for a burger and a Coke. Seriously.

Strangely, it wasn’t even midnight yet and we started getting bombarded by other runner’s (presumably)starting their R2R2R journey. It was disappointing because many of the runners didn’t yield the trail to us or even slow down. (Trail etiquette dictates that those moving downhill should yield to those moving uphill.) A few bellowed the “Looking good!/ Good job!” line which was a little too chipper for my taste.

Some time after midnight, we finally made it to the top of Bright Angel. I thought for sure I would cry, but I didn’t. I was too tired.

Water: Jason and Michele both ran out of water twice.  We gave them some water the first time, and the second time was right before a stop. They got lucky. It’s better to carry too much water than to run out. Simple as that. And really, how do you run out of water twice?!

I had a 2L bladder for water which I filled completely at each stop and a 21 oz bottle for Perpetuem/ Heed.

Calories: I brought around 6,000 calories, almost twice what I actually consumed. (Although about 2000 of that was Perpetuem and Heed.) Often what seems edible in the grocery store is anything but on the trail. And again this was the case. A dozen+ gels, 3 bars, cola flavored gel chews (next best thing to a Coke), pretzels, beef jerky, cookies, almonds, single serve tuna fish with crackers, olives, a real sandwich, and powdered Perpetuem and Heed. And I forgot to bring Payday candy bars. I think those would have done me well.

I love my Salomon pack. I bought it specifically for this trip and it has been great to me. Maybe I should finish the review I started.

Garmin Forerunner 310XT did work in the canyon (even though it was constantly losing satellite reception), lasted over 17 hours. I never stopped it, if I had, it might have made the whole trip. What I should have done was to stop it at each water stop and treat that as a run. The drawback is you have to remember to restart the watch…

Trekking poles were a HUGE help going uphill. I’ve never used them before (hills in Texas?) but they were easy to get the hang of. Most of us rented them from the General Store. Best $12 I ever spent.

A wide brim hat or a legionnaire’s cap is a must. And sunscreen.

Make sure your headlamp works! Put in new batteries and/or carry spares. You might even take two headlamps. If your sole source of light breaks somehow, you’re in a tough spot.

Proper foot care  the week prior to the run: Clip and file your toenails, pumice any tough spots, and moisturize with lotion.  Wear double socks – toe socks under Drymax- and gaiters. And carry a spare pair of socks. Dust and sand still managed to infiltrate the mesh in my shoes, but I had ZERO blisters.