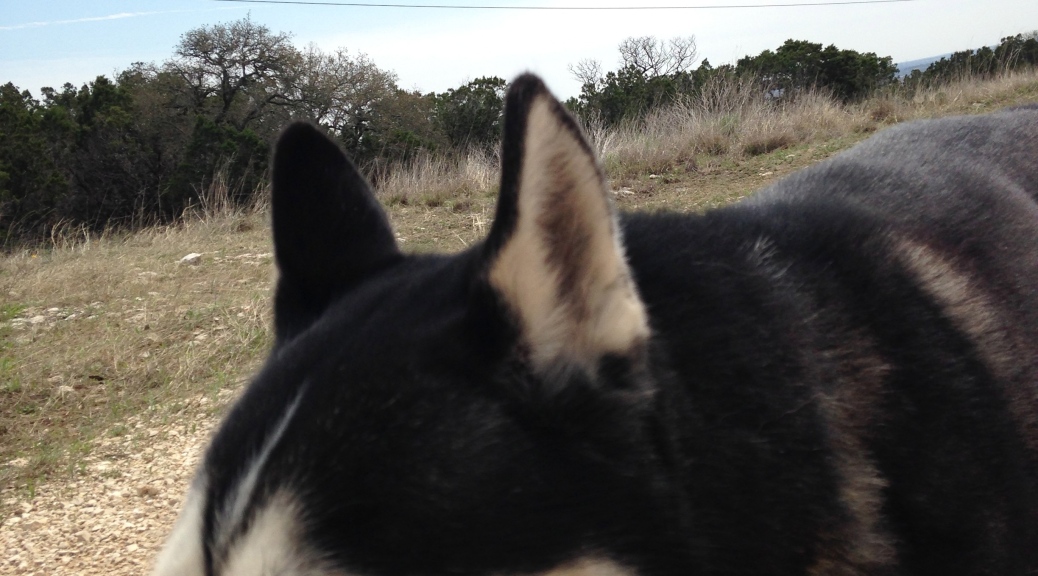 Ran the powerlines today. It’s a 3 mile unofficial trail that crosses a golf course and some neighborhoods. It’s pretty hilly. As I finished the first half of the first lap, I saw something move at the top of the hill. Got up the hill and saw that it was a dog in the street.

Black and white, medium sized, he was wandering around, looking lost, peeing on everything in sight. I whistled at him. He came over and let me pet him briefly. He had a collar, but no tag. I walked around the street looking for an open gate or a hole in a fence, but found nothing. And no one was outside. So I just let the dog be, and continued on the trail.

After a minute, I heard something behind me. I turned around – the dog was following me.

I was like, “Hey boy, want to go on a trail run?” And amazingly, that’s exactly what he did. He led the way and paced me for the next three miles. I was really impressed. He handled the rocks pretty well for going barefoot.  Sometimes, he’d stop and turn around to make sure I was still following him. When he saw that I was, he’d start off trotting again. He seemed pretty happy.

It was really cool running with this dog. It was nice having company that I didn’t have to try and make conversation with. He just led the way and I followed. And weirdly, although I’ve never been scared running this trail, I felt safer.

I’ve never had a dog before. Lately, I’ve been thinking about getting one, but my current situation doesn’t allow for a dog. But if I got a dog, it would force me to change my situation…  Hmmm… I started thinking what I would name him.

At the top of one hill, he was panting pretty heavy. I made a small ziploc “bowl” and filled it with some water. He drank just about everything in the bowl. As I was attempting to refill the bowl, the  water squirted out of the hydration tube like a little garden hose and the dog started licking the stream of water. I thought that was cute. I felt bad when I had to cut him off. Fortunately, it had rained the night before and we came across a few big puddles for him to drink from.

When he was drinking up the puddle, I noticed that his ribs were really showing. If he did belong to someone, they sure weren’t feeding him near enough.

We hit Babcock Road which completed a lap. The dog crossed the street and waited for me to follow. I contemplated what to do. Take him to a vet to see if he’s microchipped? Would he be returned to irresponsible owners?  Would he be put up for adoption? Would I be ready to adopt him? Do I take him home and put up flyers  in that neighborhood?

I hate to be the guy who “doesn’t want to get involved,” but that’s basically the route I took. I decided that I would run him back to where I found him. I figured at the very least he would be free to roam as he pleased, peeing everywhere.

We had to cross a road that had two lanes in both directions. It’s not terribly busy, but there’s limited sight and cars tend to drive fast. Instead of crossing the street, he was walking in the middle of the road, oblivious to an approaching semi truck. (And here I thought he was a smart dog.) Thankfully the truck driver was alert and was able to slow to a complete stop. I tried to call the dog to me so that I could grab his collar and hold him, but instead he took off. The driver waited patiently as I unsuccessfully tried to corral the dog. I wished that I could inform the driver this wasn’t my dog – no way I’d be dumb enough to let my dog run into traffic. The dog wandered onto the sidewalk,  and the truck slowly passed. When the coast was clear, I sprinted to the other side and the dog followed.

Right after, a lady in an SUV stopped and rolled down her window. As she did, I got really excited thinking she was the owner, but no such luck. She thought the dog was a Malamute.

Two miles later, we were back at the street where I found him.  I followed him around, hoping that he’d wander back to his house. Then I could just ring the doorbell and the dumb owner would come out and be overjoyed at the sight of the beloved dog. We walked down a few streets and by now there were people out and about. I asked everyone if they’d seen this dog before. One guy said he’d seen the dog wandering around all day, but that was it.

I got nervous when the dog started heading toward a mother and her three small children. As I’m running toward them, I asked the mother if she’d lost a dog. She said no, and her daughter said, “We already have a dog.” I jokingly asked if they wanted another. The girl says that she does want another dog. As I got further down the street, I heard the little boy say, “That’s a werewolf dog!”

The dog was going door to door at this point, every once in a while, he’d turn around to look at me. He seemed to be in his element. I figured it was only a matter of time before he got back to his house. That’s when I decided to leave him. I felt really guilty knowing that he was going to turn around and not see me. I felt like I was letting the dog down, and I didn’t want to be like his shitty owners. A dog this nice really deserves to be treated better.

I tried to help the dog, but I should have done more. I’m thinking that I should print up flyers and head back up there tomorrow to see if he’s still there. Who knows, maybe I’ll come home with a new dog.

Has this ever happened to you? What did you do?

What’s the best thing to do in this sort of situation?