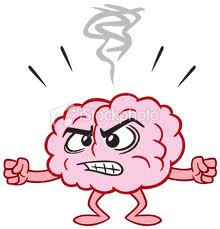 My brain is super pissed at me.

Yesterday, my usually cautious decision-making process was blind sided by over-excited enthusiasm. Now my brain is freaking out. And not in a good way.

For some reason, I thought the Nueces race was towards the end of March. Nope! I should have looked at the calendar. Then I would have seen that the race is a mere 5 weeks away. Now my brain won’t stop yelling at me, telling me what a dumb idea it was to register for a 50M without being able to properly train for it.

It might be disastrous attempting this run on such short notice: I could injure myself, or be unable to complete the run and DNF. The idea of a DNF is somewhat terrifying. I know there will come a time when I will have to face that, but so soon?

My brain knows at some point in time, I will be able to run a 50M. Possibly even in March. But it just wants to make sure that I am ready for it. My super logical brain really just wants what’s best for me.

At the same time, the (somewhat dampened) enthusiastic side of my brain is telling me, “Dude relax. Don’t be scared. It’s going to be okay. Just because you can’t train for it the same way you did for the last race, doesn’t mean you can’t do it. Just train the best you can. Lots of other people run 50M. You can too. That’s what this is about, to see what you are capable of. You won’t have a fast race, but that’s not what it’s about. It’s about just finishing. And you will finish.”

I swear, that side of my brain is a really good salesman. And that last bit is the part that really intrigues me: Can I run my first 50M on 5 weeks of training?

Lesson learned: Always consult your calendar, aka Look before you leap.